Miša Mihajlo Kravcev’s New Novel – „Velmer, the Ideas Deliverer . Or to put it Simply, the Angel of Coincidence“, Published by Dereta 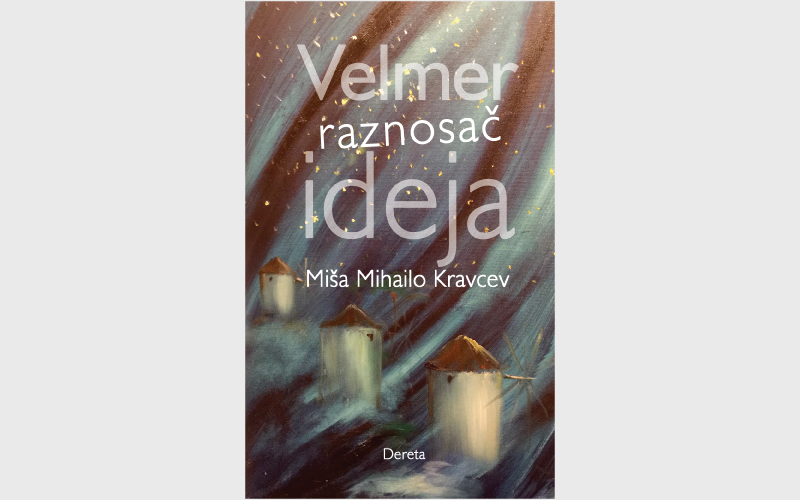 The new novel by Miša Mihajlo Kravcev – “Velmer, the Ideas Deliverer, or to put it simply – The Angel of Coincidence”, came out of print in the Dereta edition and allready was offered at the 64th Book Fair, will have its official promotion on Monday, December 9, 2019 from 7 pm in the space of the gallery at Kralja Milana 1,on the corner with Andrićev venac, where is allready underway a large painting exhibition of this author, in the occasion of his ilustratede artists monograph, also published by Dereta.

The novel will be presented by the editor, Aleksandar Šurbatović

I don’t want to paint anything that any cell phone or camera can do faster than I do, I only paint what no computer or device can ever achieve, and that every living soul will always be able to feel strongly

Miša Mihajlo Kravcev, a Belgrade artist with a Russian origin, is one of the most respected Serbian artists on the world art scene.

One of the biggest successes of his art painting career was certainly the appearance at the 58th Venice Biennale, at a joint exhibition, where he was invited by the organizers, at the prestigious Zenobio Palace.

So far, he has had a numerous number of joint and 29 artist exhibitions, most notably the one in Milan at the eminent Persolja gallery, inaugurated by Giorgio Gregorio Grasso, one of the most eminent European art critics and art historians and permanent selector of the Venice Biennale; at the Belgrade Cultural Center, Djura Jakšić Gallery in Skadarlija, inaugurated by Mirjana Zivkovic, the legendary editor of the cultural page of „Politika“ in that time, in Stockholm 1998, as part of the event – Stockholm, European Capital of Culture, in the Great Hall of the Serbian Military Club, March 2018 …

In 2019, Dereta printed a large illustrated painting monograph with the works of this artist and the texts in it were signed by Prof. Dr. Giorgio Grasso, Maja Živanović, Mirjana Živković and many others.

For great merits in the field of art, Kravcev was awarded the Order of Victory and the Order of Arthur Chillingarov, and both orders were presented to him by Mr. S. Khvorostov, the former chief of protocol of the Russian Duma.

Miša Mihajlo Kravcev’s artistic paintings exists in various collections, all over the world, on all six continents.

As a writer, Miša Mihajlo Kravcev is best known to the public as the author of the highly acclaimed novel “The Spring of a Lion”, also in the edition of Dereta, which is even compared to the novel “The Little Prince”, by Antoine de Saint Exupery, which Misha wrote in one breath at 19.

“Velmer, the Ideas deliverer, or to put it simply – The Angel of Coincidence,” was also written in his early youth, 1983, one year after the Spring of a Lion, and will be presented to the general public for the first time under the name of the publisher.

The novel itself is drinkable and warm, but a deep and essential fairy tale about the sheer ideas, how they come from and where they come from, and the significance of all these seemingly small moments, which actually determine the further course of life or entire destiny, in such a way that this book of inspiration is simply read in breath .

Although this novel was created at a similar time and in a similar mood as Spring of a Lion, it was not written in just over 24 hours, as it was the case with the lion, but it was also written in a great burst of inspiration and with equally intense emotion.

The book was edited by Aleksandar Šurbatović.

“It is a kind of novel, perhaps on the verge of a fairy tale, but a real-life fairy tale that we all endure and that belongs to all of us. And if all our lives and everything that happens to us i sjust a fairy tale, then this novel  is also a common fairy tale, and if our lives are real and exist, then this is a novel about real lives and real events.

This is a novel about life, time, all those seemingly irrelevant and tiny coincidences that so relentlessly determine the further course of everything.

The action of the novel through chapters – sequences, traces the entire lives of the main characters, and actually tells the ideas themselves, who they are and what they are and where and how they come from.

I wrote each of these sequences, or chapters intentionally, each in a different literary style, in order to better illustrate the story and the atmosphere and to give the rhythm of the novel better, so I think that in “Velmer, the Idea Deliverer” to be enjoyed by those more refined baroque style worshipers, as well as by others who are eager for faster speed and action.

The idea for this novel came about in the same period as Spring of a Lion, a year later and Velmer was written with equal inspiration. Then I really liked to touch and present all those elusive and indescribable, all those essential questions in us. like everything that belongs to the logos of time and existence, which to us mortal people is sometimes so unfathomable.

Unlike the first novel, originally printed as originally written, in 1982, “Velmer,” was slightly refined and supplemented in 2016.

Because of all this, I am sure that Velmer, will like many and will read it with pleasure, just like Spring of a Lion ”- the author points out