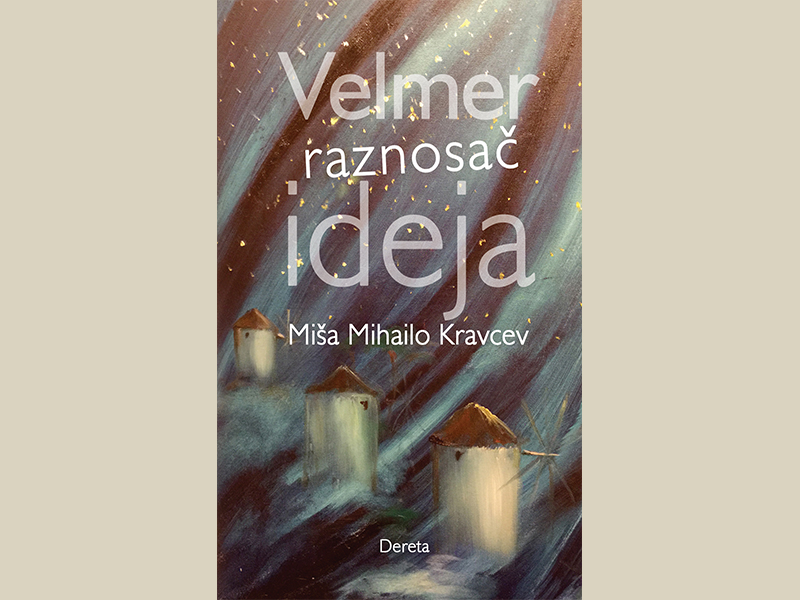 A NEW NOVEL BY MIŠA MIHAJLO KRAVCEV „VELMER, THE IDEA’S DELIVERER, OR MORE SIMPLE TO SAY – THE ANGEL OF COINCIDENCES“, published by Dereta

A new novel by Miša Mihajlo Kravcev, “Velmer, the Idea’s’Deliverer, or More Simple to say – the Angel of Coincidences“ is published by Dereta, and it will be presented at the 64th Belgrade Book Fair, at the Dereta’s stand.

Miša Mihajlo Kravcev, an intriguing writer and art painter, is the author of the highly acclaimed novel „ A Spring of a Lion“, also in the edition of Dereta, which is even compared to the novel „ The Little Prince“ by Antoine de Saint-Exupéry, which Miša wrote in one breath when he was 19 years old.

“Velmer, the Deliverer of Ideas, or More Simple to say – the Angel of Coincidences“, was also written in his early youth, 1983, one year after the Springe of the Lion, and for the first time will be presented to the public under that name.

The novel itself is a potable and warm fairy tale about how ideas arise and where they come from, as well as the significance of all these seemingly small moments, which actually determine the further curse of life and fate, in such a way that this book of inspiration is simply read in one breath.

Although this novel was created at a similar time and in a similar mood as “Spring of a Lion”, it was not written in just over 24 hours, as it was the case with a Lion, but it was also written in a great burst of inspiration and with equally intense emotions.

The book was edited by Aleksandar Šurbatović.

“It is a kind of novel, perhaps on the verge of a fairy tale, but a real-life fairy tale that we all endure and that belongs to all of us. Throughout the chapters, or the sequences, it covers the entire life of the main characters, and in fact talks about the ideas themselves, what they are and where they come from, as well as the impact of all those little and the most important moments on our entire destiny.

I have written each of these sequences, or chapters, deliberately in different literary styles in order to better evoke the action and atmosphere. Thus, in novel will be able to enjoy both refined baroque-style admirers, as well as others, eager for action and highly speed.

The idea of ​​Velmer, the deliverer of ideas, also emerged at some moment, just like Spring of a Lion and just like what the novel is about, and I liked it as a way to touch and present all the elusive and indescribable, all essential questions within us, as well as time itself, which is so unfathomable to us, the mortal people.

I am sure that this novel will be liked by many and will be read with a great pleasure”- the author points out.

The official promotion of the novel “Velmer, the Deliverer of Ideas, or More Simple to say – The Angel of Coincidences”, at which journalists and all interested parties will be able to ask questions and find out more with the author himself, will be held in the premises of the former Eurosalon, Kralja Milana Street, No. 2 in Belgrade, where at that time an exhibition of paintings will be held on the occasion of the Great Art Monography of Miša Mihajlo Kravcev, also in the edition of Dereta.

The precise dates of this promotion, as well as a book signing by the author at the Belgrade Book Fair on the Dereta’s stand, will be determined subsequently.